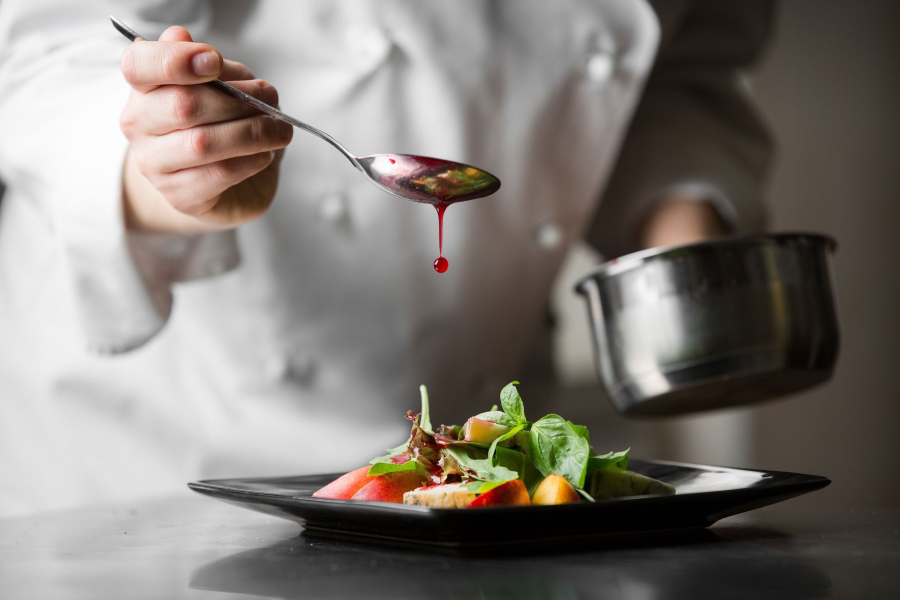 Chef’s Table - Art on A Plate

Held under the theme ‘Art On A Plate’, 10 of Abu Dhabi’s leading chefs are offering limited-edition five-course menus that uniquely fuse taste and aesthetics, featuring the most creatively-styled vegetarian and non-vegetarian dishes.

Artistic collaborations will elevate the dining experiences across restaurants in the city by taking guests on a journey to explore the senses.

Martabaan
Chef’s Gaurav inspiration behind the menu is Rangoli. Rangoli is an art form, originating in the Indian subcontinent, in which patterns are created on the floor or the ground using quartz powder materials such as coloured rice, coloured sand or flower petals. The menu depicts richness, warmth, different colours which is very unique to the Indian palate. The culinary journey will represent vibrant colours, different tastes which is associated with different regions in India.

Hakkasan
Chef’s Lee inspiration in creating the menu for Art On Plate is the art of ‘Taiji ‘- the Chinese philosophy of balance and moderation. Chef Lee has created a menu that balances art with sensual Cantonese flavours. Seeped deep in Hakkasan's roots of authentic Chinese cuisine, the unique Art On A Plate menu takes a creative approach with modern twists, using thefinest seasonal ingredients and fresh produce to really showcase what Hakkasan is about.

Villa Toscana
Chef Rosario brings Art On A Plate to life at Villa Toscana. He has merged two of Italy’s greatest exports - food and art, creating a unique menu inspired by Leonardo Da Vinci’s famous paintings. Take a journey through art as you relish dishes such as ‘The Last Supper’, ‘Lady with an Ermine’ and the ‘Mona Lisa’.


Signature 3
The Signature 3 has created a bespoke menu that offers guests a journey through the different art epochs. Highlighting the hotel’s signature restaurants; Sontaya, Mazi and Buddha Bar-Beach, the unique menu transports guests from the runways of Milan to the paintings of Pablo Picasso.

Li Jiang
Chef Tran Thanh Chung has taken inspiration from Japanese watercolour techniques to create a visually stimulating menu. Representing the bold strokes of watercolour techniques are the bold flavours of the menu, such as the Sushi Temari. Highlighting an array of vivid colours each dish has been designed to truly represent ‘Art On A Plate’.

LPM
LPM will be serving a new art a la carte menu by LPM Chef Patron, Raphael Duntoye. Chef Raphael has chosen a selection of signature dishes including some of LPM's newly launched creations, which will best represent this unique project. Guests will experience the true artistic spirit and influences of the South of France: fresh, simple,colourful and inspirational... just like the food at LPM.

Verso
Chef Marco has taken inspiration for the menu from Antonio Vivaldi's 'Four Seasons', a set of short Baroque violin concertos. The Italian composer's most popular works have been reinterpreted to Art On A Plate, taking guests from the season of winter, where they will experience dishes like the Terrina di Cervo, to summer with dishes such asthe Tortelloni alla Bufala through to autumn and ending on a sweet note.

Shang Palace
The menu has been inspired by the legendary Manchu–Han Imperial Feast, which refers to a grand banquet held sometime in the Qing dynasty of China (1644–1911). One of the grandest meals ever documented in Chinese culinary history, the banquet reportedly consisted of 108 dishes served in six meals over the course of three days. The dishes themselves involved exotic ingredients and a variety of cooking techniques from every part of the Imperial China.

The Manchu Han Imperial Feast was more than just a lavish buffet of food, it was the pinnacle of culinary art and aesthetics. The banquet was a feast of both sight and taste, with great pains made by the chefs to create dishes that were visually enticing as well as savoury and delicious. For the Abu Dhabi Culinary Season, Shang Palace will be featuring an exclusive menu featuring five famous dishes out of the 108 the Manchu-Han Imperial Feast dishes and showcasing artistic interpretation of the legendary feast combining locally sourced ingredients with original cooking methods of the Imperial China.